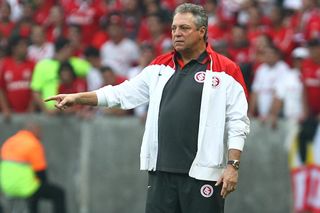 Internacional were brushed aside by visiting Bahia in the opening leg of their second round clash last week, losing 2-0 at the Estadio Jose Pinheiro Borba.

Bahia had drawn three consecutive matches in Brazil's Serie A but returned to winning ways at the expense of high-flying Internacional, who sit second in the table, thanks to quick-fire goals form Lucas Fonseca and Diego Macedo in Belo Horizonte.

Marcio Araujo's Bahia now have two priceless away goals up their sleeve heading into Thursday's return leg on home soil, but Internacional coach Braga insisted the tie is far from over.

"We will not be discouraged. We will continue to work," Braga said of the 2008 champions.

"This team has been one of the leaders in the Brazilian Serie A. We need to regroup."

Fellow Brazilian powerhouse Sao Paulo - winners in 2012 - must also overturn a first-leg deficit on Thursday, though they are in relatively better shape as they return to familiar surroundings with an away goal.

Sao Paulo - minus the likes of Ganso, Kaka, Osvaldo and Luis Fabiano - were beaten 2-1 by Criciuma at the Estadio Heriberto, ending the club's three-match winning streak.

Speaking post-game, Sao Paulo coach Muricy Ramalho said: "We could have taken a draw here, was a very similar game. Overall, it was not a good match."

Fluminense, Goias, Vitoria and Sport Recife are all in action in second-leg fixtures on Wednesday.

Fluminense played the final half-hour with 10 men after Klever was sent off but they still held on for victory.

As for Vitoria, they hold a 1-0 advantage as they prepare to welcome Sport Recife to Salvador.

While four second-round ties are set to conclude, three opening-leg fixtures will get underway in Argentina midweek.

There are two games on Wednesday, with Gimnasia La Plata hosting Estudiantes and River Plate making the trip to Godoy Cruz.

Gimnasia La Plata will enter the match on the back of a win in Argentina's Primera Division over the weekend, while Estudiantes were beaten.

Godoy Cruz will be hoping they can improve against a red-hot River Plate outfit, having been routed 4-0 by the powerhouse on August 24.

On Thursday, Rosario Central are at home to struggling Boca Juniors - the competition's most successful team with two wins in 2004 and 2005.