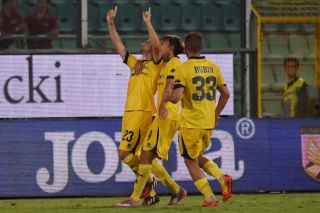 Palermo sealed their return to the top flight last season but the reigning Serie B champions were sent crashing out of the Coppa at home in convincing fashion by second-tier Modena.

Ahead of their Serie A opener against Sampdoria next week, Palermo found themselves 1-0 down after just six minutes courtesy of Nicola Ferrari's opener.

Stefano Beltrame added a second three minutes before the break and Andrea Schiavone capped off an impressive performance for the visitors late on at the Stadio Renzo Barbera.

Palermo's Serie A rivals Atalanta and Cagliari avoided such an upset however as they saw off Pisa and Catania respectively.

Former Coppa champions Atalanta had Luca Cigarini and Leonardo Spinazzola to thank for their 2-0 win – Pisa's Stefano Morrone was sent off late on - while Marco Sau and Diego Farias were on target in Cagliari's win over 10-man Catania.

The remainder of Saturday's fixtures were all-Serie B clashes as Varese left it late to see off Virtus Entella 1-0 with Leonidas Pereira Neto on target for the 10-man hosts who meet either Lazio or Bassano in the next round.

Goals from Gianmario Comi and Demiro Pozzebon helped Avellino make the most of their man advantage and come from behind to edge Bari 2-1 while Perugia needed extra time clinch a 2-1 win against Spezia.