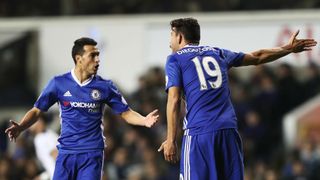 Diego Costa dismissed the importance of his mid-game spat with Pedro during Chelsea's 2-0 defeat to Tottenham, likening his fellow Spain international to a "brother".

Part of Chelsea's problem on the day was a lack of cohesion in attack and that was encapsulated by a first-half incident that saw Pedro and Costa embroiled in a heated exchange after a miscommunication between the two.

The pair argued for several minutes before eventually appearing to shake hands and Costa is adamant that their relationship did not suffer any lasting damage.

"We have a great understanding with each other. When you have a trusted relationship and intimacy with a team-mate it is normal for these things to happen.

"It was just a moment during the game and that's it. It was nothing.

"Pedro is my brother and we love each other."