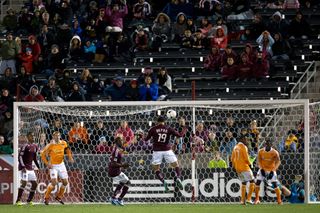 Saprissa saw their four-game unbeaten run brought to an end after two goals from Bryan Solorzano helped Carmelita to a 2-1 win.

Solorzano struck either side of the break before Josue Martinez pulled one back two minutes from time, but the home side held on to move up to fifth spot.

But Deportivo are now four points adrift of the table-topping Herediano, who easily accounted for lowly Belen Siglo XXI 4-1.

First-half goals to Anllel Porras and Ismael Gomes sent the visitors on their way to victory, with Jose Cancela and Minor Diaz completing the rout late on.

In other results, Limon and Cartagines played out a goalless draw while UCR slumped to their second home defeat in four days, going down 2-1 to Perez Zeledon.

Alajuelense went second courtesy of a 1-0 win on the road at Uruguay, while Puntarenas scored in the first minute and held on to beat Santos de Guapiles 1-0.