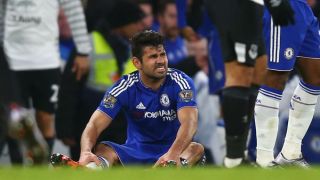 Guus Hiddink confirmed Chelsea striker Diego Costa has been sent to hospital for a scan on the shin injury sustained in the six-goal thriller against Everton.

After sparking a comeback from 2-0 down with an opportunistic goal and an assist for Cesc Fabregas, Costa went down off the ball clutching his right leg and was replaced by Loic Remy in the 80th minute.

The striker suffered with hamstring issues throughout 2015, but Chelsea boss Hiddink revealed he is struggling with a new problem following Saturday's dramatic 3-3 draw at Stamford Bridge.

"He is in the hospital now and they will have a check with a scan," said Hiddink. "We don't know the result yet. I hope it's not bad. It's on his shin.

"Whenever the report is released we will give information as soon as possible. It's true he was in a lot of pain."

Although Radamel Falcao also remains sidelined through injury, the Dutchman went on to rule out the possibility of signing a replacement for the Spain international, despite Chelsea having the capability to bring in new additions.

"[We can enter the transfer market]if we want to, but at the moment we are doing nothing," Hiddink added.

"We hope Diego is coming out of the hospital in good health and we go on as we are doing now. We are not in negotiations with whoever at this moment."