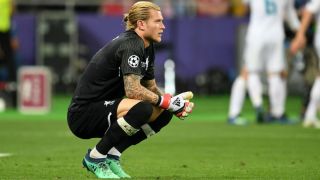 Thibaut Courtois is not convinced concussion can be used as an excuse for Loris Karius' mistakes in Liverpool's Champions League final defeat to Real Madrid.

Liverpool lost 3-1 in Kiev on May 26, with Karius producing two major errors which ultimately cost the Reds dear.

For Madrid's opener, Karius threw the ball straight to Karim Benzema, giving him an easy finish, before then making a mess of a long-range Gareth Bale effort for the final goal of the game.

But, just prior to his first howler, Karius appeared to be caught in the head by Sergio Ramos' elbow, and on Monday a statement from the Massachusetts General Hospital concluded – following examinations – that the goalkeeper had suffered concussion.

Courtois doubts that the blow to the head can be blamed because of two impressive saves Karius also made after the collision with Ramos, calling the announcement "strange".

"I feel sorry for what happened with him, but to blame it on concussion that he made those mistakes - he also made two amazing saves. So that was luck then? I don't know because he couldn't see the ball.

"It's unfortunate for him to have made those mistakes, but if you have concussion you will leave the game or the doctors will tell you; 'Look, you cannot see clearly anymore, you must leave the game.'

"If they want to say it's because of that, it's OK. He said after the game he made two mistakes, I think everyone will accept that.

"It can happen as a goalkeeper, but to blame it on a concussion now, I find it strange. But if medics say that from Boston, it's OK."