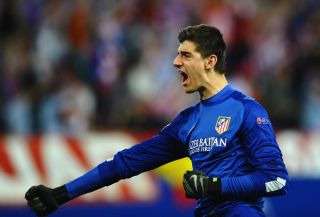 Diego Simeone's men host Chelsea in the first leg of their last-four tie on Tuesday, aiming to reach the final of Europe's premier club competition for the first time since 1974.

The clash sees on-loan keeper Courtois come up against permanent employers Chelsea for the second time since joining Atletico temporarily from the London club three years ago.

On the first occasion, Atletico beat Chelsea 4-1 in the 2012 UEFA Super Cup, a result that the Belgium international is hopeful of replicating this time around.

"For me, the fact that we’ve drawn Chelsea, like we did in the European Super Cup, is special because even though I'm at Atleti, Chelsea are my club too," Courtois told FIFA.com.

"It's better not to think about it too much though and play like I always do, because if I start thinking, 'Oh, I'd better be careful', then I'll end up playing poorly.

"I want to win trophies here and I'll be an Atleti supporter for these two games, but at all other times I'm a Chelsea fan too. I hope they win the Premier League, just not these two (Champions League) matches.

"I really hope we can reach the final as we're so close. They're the favourites (Chelsea), but (beaten quarter-final opponents) Barca (Barcelona) were too."

Atletico lead La Liga by four points from Barca and are on course to claim a double that few would have anticipated at the start of the season.

And Courtois feels coach Simeone deserves much of the credit for their achievements.

"So much of this success is down to Simeone because he's the man who’s guided us this far," the 21-year-old added.

"From the first time he spoke to us when he was appointed, he told us he had a very clear idea about how he wanted things to be done and how he wanted us to play.

"That clarity has been key. You might be out for five weeks but when you come back you know exactly what you have to do, because the way we set ourselves out doesn't change. We know what each player's role is."