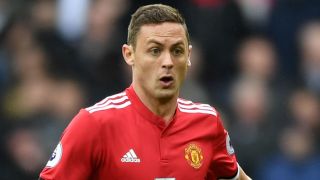 Thibaut Courtois conceded Chelsea are missing Nemanja Matic as they struggle to deal with injuries in midfield, but understands why the club parted with the Serbia international.

Antonio Conte's men were beaten 3-0 by Roma in the Champions League on Wednesday and head into Sunday's Premier League clash with Manchester United with the club still unsure whether N'Golo Kante will be fit to return after four weeks out with a hamstring injury.

The visit of United will mark Matic's return to Stamford Bridge following his July move to Old Trafford, with Chelsea selling him for an initial £35million, potentially rising to £40m.

While Chelsea are still relatively well placed to progress to the Champions League knockout stages, they have stumbled in defence of the Premier League title, and are nine points adrift of leaders Manchester City.

And asked about Matic following Chelsea's defeat at the Stadio Olimpico, Courtois replied: "I think we know he has qualities, he is someone that last year gave us the balance as well.

"He decided to go to another team, we won't live in the past. He decided to leave, he left. Our midfield is very good, we have strong players.

"I don't know if we miss him but obviously, if you see we have two injuries in the midfield then obviously you could say we missed Nemanja. He is a quality player who is doing well at Manchester United. That's not my decision to make [about selling him].

"Those are questions that you need to ask to the people who made that happen. I think that if a player nowadays wants to go to a team, the player has a strong will to join another team, it is hard and you cannot just ignore him and say you can't leave.

"Then you have a disappointed player who maybe won't play at his best. For us, you have given another player to another big teams. These are the choices made in football. He is a quality midfielder but hopefully we can show that we are better on Sunday.

"This season we are conceding more chances than we did last year. We have to try to get that extra step in, that extra per cent to stop actions, not be 90 per cent. Maybe with a lot of games, sometimes you maybe go a bit less.

"Obviously it is different to last season. Injuries have been coming and not at a good time. We know how important N'Golo is for us, he is the guy that brings a lot of balance into the team. But we can't push him to play if he doesn't feel ready.

"Danny [Drinkwater] was also out for a long time as well. It means Tiemoue Bakayoko and Cesc Fabregas have played a lot of games in midfield and obviously that goes into their legs and it is harder for them to keep up the pressure, especially against the midfield three like Roma had."