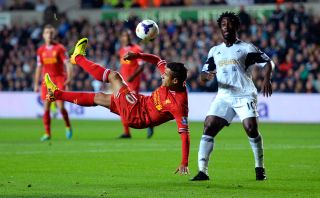 The Brazilian playmaker is nearing the final stages of his recovery from surgery on a shoulder injury sustained in the 2-2 draw at Swansea City last month, although manager Brendan Rodgers appears unlikely to consider him for selection when West Brom visit Anfield this weekend.

Rodgers has instead hinted that the former Inter man may make a comeback at the Emirates Stadium against the current Premier League leaders.

The Northern Irishman said: "He might just be short for this weekend.

"I think, after the weekend, he'll be fine.

"He has got really good strength in his shoulder now. It's just getting him up to speed in training and joining the group.

"He has been in the last couple of days and has looked brilliant, like he has never been away with his flow and fluency with the ball."

Coutinho has sat out five games in all competitions as a result of his injury, with Rodgers relishing the prospect of having the 21-year-old back at his disposal.

"You always miss quality," he added.

"It's great to see him back in and it's another quality player back for us."