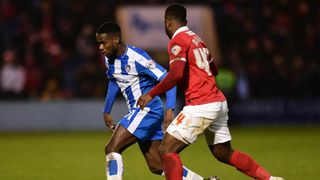 Colchester United boosted their hopes of avoiding relegation from League One with a 1-0 win away at Coventry City on Tuesday.

Gavin Massey grabbed the only goal of the game at the Ricoh Arena in the 18th minute, producing a neat finish after good work from team-mate Elliot Lee.

The out-of-form hosts wasted a glorious chance to draw level before half-time when Jacob Murphy failed to convert a penalty, his effort being saved by visiting goalkeeper Elliot Parish.

Colchester, who have won two games in a row for the first time since September, are still seven points from safety, while Coventry's play-off hopes are fading fast, with an eight-point gap to bridge and only seven games remaining.