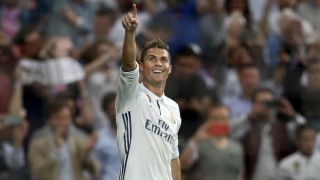 By his own stratospheric standards, a return of 25 LaLiga goals is somewhat underwhelming for Cristiano Ronaldo.

It marks the first time since the Portugal superstar's first campaign at the Santiago Bernabeu in the 2009-10 season that he has failed to score 30-plus league goals – on three occasions he has netted 40 or more.

Many observers believe Ronaldo to be a player who, while still technically brilliant, is in physical decline, the frightening bursts of speed and ability to effortlessly glide past helpless defenders perhaps diminishing.

But anyone who doubts his worth to this batch of Galacticos need only look at Ronaldo's incredible run-in that fired Madrid to a 33rd LaLiga title – sealed with a 2-0 win at Malaga on Sunday – and a third Champions League final in four seasons.

Over the past nine games in all competitions, Ronaldo has contributed 14 goals, failing to score in just two of those, and here we take a look at his stunning contribution.

Bayern Munich 1-2 Madrid: Arturo Vidal's bullet header had given Bayern a deserved lead in the Champions League quarter-final tie, but Ronaldo struck just after the break before turning the match on its head by poking home 13 minutes from time to give Madrid a crucial away lead.

Madrid 4-2 Bayern Munich: Just a week later, Ronaldo racked up a landmark hundred Champions League goals in a dramatic second leg. Robert Lewandowski's strike and a Sergio Ramos own goal sandwiched Ronaldo's first to take the tie into extra time. A red card for Vidal before the additional time hindered the visitors, though, and Ronaldo drilled in a second – albeit from an offside position – before completing a historic hat-trick. Marco Asensio added another for a 6-3 aggregate win.

Madrid 2-1 Valencia: Ronaldo racked up his 20th LaLiga goal of the campaign by turning in Dani Carvajal's cross, but the Portugal captain then saw a penalty saved by Diego Alves. Dani Parejo levelled for Valencia, but luckily Ronaldo's blushes were spared as Marcelo was an unlikely late hero.

Madrid 3-0 Atletico Madrid: After proving the thorn in Bayern's side, Ronaldo was once again the star of the show as city rivals Atleti were put to the sword in the first leg of their Champions League semi-final tie. The former Manchester United forward headed in a 10th-minute opener and eased any tension with an unstoppable effort into the top corner with less than 20 minutes to play. He then collected the match ball with a venomous effort in the closing stages.

Madrid 4-1 Sevilla: If Madrid needed any reminding of the threat Sevilla pose they only had to cast their minds back to January when they were sank by two late goals in a 2-1 loss. It was a different outcome on this occasion, though, as Ronaldo reached another landmark with his 400th goal for the club. He was on target in each half as Madrid took a huge step towards the title.

Celta Vigo 1-4: Just three days later Madrid were 4-1 winners again and Ronaldo had another brace to his name as Zinedine Zidane's men closed within a point of the title. After hammering home in the 10th minute, Ronaldo doubled his and Madrid's tally by finishing a superb counter-attack. Celta halved the deficit through John Guidetti after Iago Aspas had been sent off, but Karim Benzema and Toni Kroos finished the job.

Malaga 0-2 Madrid: How fitting it is that Madrid's title win should include a key contribution from their main talisman. It took Ronaldo just two minutes to ease any lingering nerves, the forward latching onto Isco's defence-splitting pass before rounding Carlos Kameni and slotting into the early net. Karim Benzema finished the job in the second half and Madrid's title celebrations could begin.