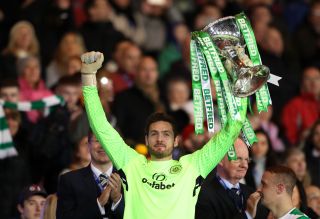 Scotland goalkeeper Craig Gordon has signalled the end of his Celtic career as he bid farewell to the club on social media.

The 37-year-old had been offered a new contract on much-reduced terms but has decided to accept a new challenge.

The former Sunderland player is considering an offer to return to Hearts and has held talks with other clubs.

He added on Instagram: “The last six years have been the most successful period of my professional career, and I would like to thank everyone who has played their part in making this possible.

“The club, for initially taking a chance on someone who hadn’t played in nearly three years. And to Woodsy for encouraging me to make the move in the first place, and for training me ridiculously hard ever since.

“I’ve had the pleasure of playing alongside some brilliant team-mates – who without, my time at the club would have been very different.

“The fans, for their support. Home, away… all over the world. Thank you. My family, who have been there through it all. The ups and downs, the miles, the sacrifices, the celebrations. I hope I’ve made them proud.

“At 37, and with a few years in me yet, I just want to play the game I love, and have played for 20+ professional seasons. Football can make for difficult decisions, but I’m looking forward to the next chapter and challenge. Thank you, again.”