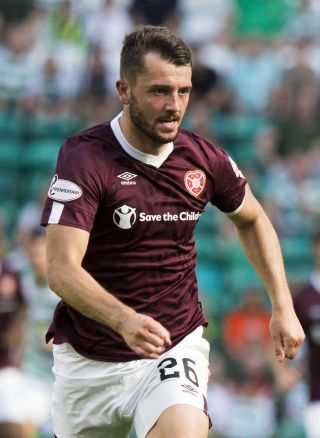 Hearts manager Craig Levein believes his side can continue their recent recovery despite suffering another injury blow.

Hearts had been looking to build on victories over Hibernian and Aberdeen when they faced St Mirren last weekend but lost both Halkett and Loic Damour before half-time, with the latter a major doubt for Saturday’s visit of Kilmarnock with a hamstring injury.

In the end a goalless draw in Paisley made it three games unbeaten after a poor start to the Ladbrokes Premiership season saw Hearts bottom after five matches with only two points.

And Levein vowed not to get too down after losing Halkett following the former Livingston captain’s promising start at Tynecastle.

“We’ve been in this particular mode for a while now so I try not to get overly-concerned about these things and just look at the players who are fit and available,” he said. “That’s the best I can do at this time.

“I wouldn’t say I was expecting it but if it happens it doesn’t dent me quite so much. We just seem to be in this phase of injuries one after another. So now it’s not quite as sore as it was when it first happened.”

Serious injuries have dogged Hearts from the start of last season, when they lost Christophe Berra, Naismith, Uche Ikpeazu and a host of others for a large part of the campaign.

The blows eventually took their toll following a flying start to the season and Levein hopes his summer strengthening will ultimately make them more resilient to such blows.

He added: “I have some quite versatile players, which helps. Young Aaron Hickey, Michael Smith, Sean Clare and Jake (Mulraney) have played in a number of different positions. So I have been able to switch players round, which has helped.

“I think we have one wheel back on the track and the job now is to get the other one back on.

Hearts have only taken two points from three home games and Levein knows they will have to handle the fans’ expectations that they will beat Angelo Alessio’s side, who have kept six clean sheets in seven matches.

“I think every home game that is the case, no matter who we play,” Levein said. “Kilmarnock in recent seasons have elevated their position in Scottish football so it’s not like facing Kilmarnock three or four years ago.

“But we are at home and if we can bring the same sort of energy to the game which we did against Aberdeen at home, then I’m sure our supporters will be happy.

“I hope they don’t have to be patient, but they might have to be. Kilmarnock are very, very well organised defensively and that would explain their record of clean sheets.

“Angelo had a wee bit of a sticky start but his team have improved over the last month or so and they are not much different from what they were last season, which is warning enough for us.”