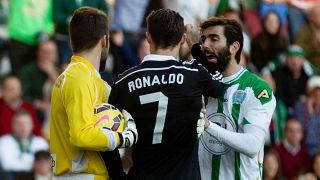 Cordoba have revealed that defender Jose Angel Crespo is set to undergo a medical with Aston Villa after the two clubs agreed a fee.

The 28-year-old full-back spent last season on loan with the Andalusia club from Bologna and his move has since been made permanent.

Cordoba, who were relegated to the Segunda Division after finishing bottom of La Liga last term, stated on Monday that Crespo is on the verge of a move to Premier League side Villa.

The Spanish club tweeted on Monday: "Cordoba CF and Aston Villa FC have reached an agreement to transfer Jose Angel Crespo to the English team.

"The defender, after an agreement between clubs, travels today to England for medical examinations prior to signing."