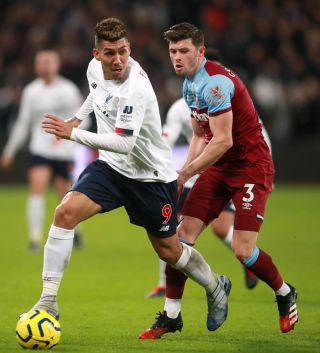 Aaron Cresswell saw enough in West Ham’s 2-0 defeat by Liverpool to suggest they can climb away from relegation trouble this season.

The Hammers limited Liverpool’s chances and created a few decent opportunities of their own, but ultimately Mohamed Salah’s penalty and Alex Oxlade-Chamberlain’s second-half strike secured yet another victory for the runaway leaders.

It means West Ham remain above the bottom three only on goal difference, and they face a crunch visit from fellow strugglers Brighton on Saturday.

How happy are you out of 10 with the #PL table after 24 matches…? pic.twitter.com/6wdRThEGIv— Premier League (@premierleague) January 30, 2020

However, defender Cresswell said: “I think if we perform like that from now until the end of the season we’ll be fine.

“On another day we take one of those chances and it is a completely different game, or if we go in at half-time at 0-0.

“But they get a penalty 10 minutes before the end of the half which maybe on some days isn’t given, but it was.

The situation could become a lot worse before it gets better as, after Brighton, West Ham travel to both Manchester City and Liverpool.

“It can’t be that we have Liverpool and that is a free hit, it is not. Every game, whether it is Brighton or Manchester City, is massive.”

Liverpool are now a mammoth 19 points clear at the top as they close in on that elusive 19th title, yet still no one at Anfield is putting the champagne on ice.

“There are a lot of tough games coming up so we’ve just to keep plodding along and keep doing what we are doing to first and foremost achieve what we want to do in the league,” Oxlade-Chamberlain told the club website.

“That’s the most important thing – finishing as high up as we can – and we are in a good position.”