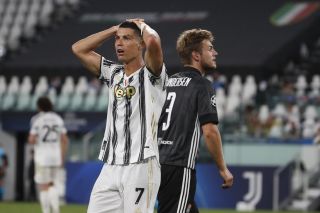 Cristiano Ronaldo’s double for Juventus in a 2-1 victory over Lyon was not enough to stop the Serie A champions suffering a shock last-16 exit on away goals in the Champions League.

The former Manchester United attacker struck once in each half to cancel out Memphis Depay’s 12th-minute opener for the visitors in Turin.

Ronaldo’s strikes took him up to 37 for the season, which is the most goals scored in a single season by a Juve player, but it was Lyon who booked a quarter-final meeting with Man City after a key 1-0 victory in the first leg.