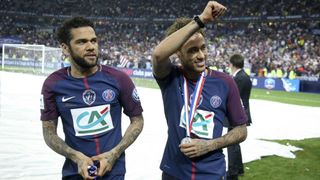 Dani Alves thinks Brazil and Paris Saint-Germain team-mate Neymar was harshly judged during the World Cup and has blasted those who criticised him as "weak".

Neymar had a race against time to be ready for the finals after breaking his foot in February, an injury which initially looked likely to rule him out.

He managed to return to fitness before the big kick-off and soaked up the attention in Russia, but not always for good reasons, as he was frequently ridiculed for his theatrics and behaviour on the pitch.

Neymar's underwhelming performance as Brazil were eliminated by Belgium in the quarter-finals made matters worse, but Alves thinks the criticism was exaggerated.

"I think so [it was over the top]," Alves told reporters at an auction and gala hosted by Neymar.

9 - Most chances created for a specific teammate at the 2018 9 - Neymar to Coutinho7 - Kieran Trippier to Harry Maguire6 - Kevin De Bruyne to Eden HazardPartnerships. July 15, 2018

"We have to focus on the things that make us mature and that help us become a real man. The rest is only silly things.

"I wish everyone who talked about Neymar would do things like he does here [the auction event].

"Criticising is a weapon of the weak. I believe that we football players always strive to do the best for the group and for our team-mates.

"Those who know Neymar know his great quality and how special he is. And I insist again, we have to take care of players like that, they illuminate football. It's players like him that make football have any sense.

"But as I said, criticising Neymar and players of that level is easy; what's difficult is to do what they do."