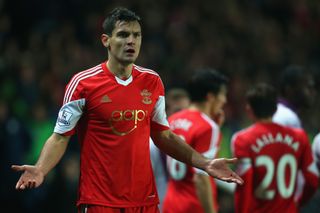 The Croatia international was carried off on a stretcher in the latter stages of Southampton's 2-2 draw at Sunderland on Saturday, with forward Gaston Ramirez taken from the field with a similar issue at the same time.

A statement on the Croatian FA's website on Tuesday read: "Croatian defender Dejan Lovren will be out for several weeks due to an ankle injury sustained in the match with Sunderland.

"(He) will wear a protective boot for walking, and the (absence from the) field will be 3-4 weeks."

Lovren has become an instant fans favourite at St Mary's Stadium since signing from Lyon in the close-season, making 20 appearances thus far.

When contacted by Perform, Southampton were unable to confirm the length of Lovren's absence.