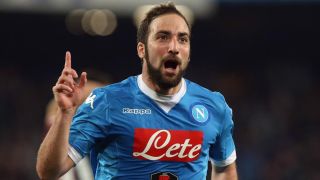 Record Juventus signing Gonzalo Higuain was greeted by a crowd of fans as he arrived for a medical in Turin on Wednesday.

The Serie A champions announced on Tuesday that they had reached an agreement with Napoli to sign the striker for €90million, making it the third most expensive transfer in history.

Supporters were in fine voice to greet last season's Serie A top scorer as he touched down before heading to Juve's medical centre to complete final check-ups.

That moment when you meet your new fans for the very first time  July 27, 2016

Higuain, who has signed a five-year deal, was all smiles at JMedical as he completed regulation tests.