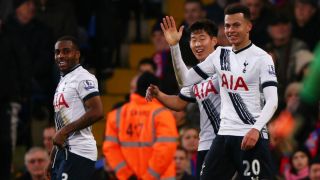 Dele Alli scored a late wondergoal as Tottenham recorded a dramatic 3-1 victory at Crystal Palace in the Premier League on Saturday.

The hosts had taken the lead through a Jan Vertonghen own goal to breach an opponents' backline  for the first time in six Premier League games, but they could not hold on to earn what would have been a first win since December 19.

Harry Kane started the comeback by netting for the fifth time in seven league matches with a second-half header in a match that saw Spurs extend their unbeaten run to 10 away matches.

And moments after Palace had struck the crossbar twice, Alli netted with a remarkable volley, a goal that may not be bettered for quality this season.

Nacer Chadli then put the icing on the cake with a long-range goal in the fifth minute of stoppage-time.

The win sees Tottenham stay fourth in the table but increases their lead over Manchester United to five points, while the hosts slip down to 11th place.

Spurs made one change from their last Premier League starting XI as Son Heung-min replaced Erik Lamela, while the home side were unchanged.

Tottenham made the brighter start, with Son shooting just wide after showing some quick feet outside of the penalty area and Kane forcing Wayne Hennessey to save with his legs from a tight angle.

But it was Palace who opened the scoring on 30 minutes, ending their drought. An initial attacking move had broken down but Vertonghen's heavy pass was mis-controlled by Christian Eriksen, allowing Wilfried Zaha space on the right.

The winger fired across goal and Vertonghen's attempted interception saw him divert the ball past Hugo Lloris.

Zaha then lashed a rushed effort over after impressively weaving past Danny Rose, before the Spurs defender came close to an equaliser at the other end.

Eriksen's cross picked out Rose, whose powerful volley at the far post was excellently held by Hennessey as Palace went into half-time ahead.

Tottenham came out strongly for the second half and had a penalty appeal turned down by referee Martin Atkinson when Son claimed handball against Scott Dann.

A brilliant Eriksen strike flew just past the top corner a few moments later, while Kane's downward header was saved by Hennessey.

A leveller appeared to be coming and it arrived on 63 minutes when substitute Chadli's looping cross found Kane, who leapt well above Damien Delaney to convert with a close-range header.

Palace produced their first shot on target in response, with a diving Lloris impressively keeping out a left-footed strike from Zaha before the France captain pushed away a Pape Souare drive.

The home side went even closer to a dramatic late winner when Jason Puncheon's free-kick was headed against the bar by Dann and substitute Mile Jedinak then smashed the bar himself with his effort from the rebound.

Those misses became more significant when Alli netted one of the goals of the season with six minutes left on the clock. The midfielder controlled Eriksen's header, brilliantly flicked the ball over Jedinak and unleashed a stunning volley past Hennessey.

Alli almost made it three for Spurs when he beat Delaney and crashed a shot against the crossbar, but the third goal did arrive in stoppage time when Chadli cut inside on a solo run and curled an excellent finish into the far corner.