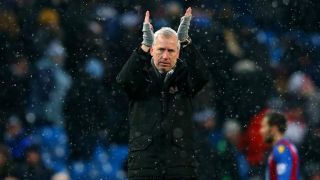 Crystal Palace manager Alan Pardew has urged his goal-shy strikeforce to shake off their gloomy recent form against near-neighbours Tottenham on Saturday.

After heady talk of Champions League aspirations, Palace have slipped to eighth following consecutive Premier League defeats against Chelsea, Aston Villa and Manchester City, with Pardew's side failing to find the net in their last five league outings.

Palace have not scored in the league since Lee Chung-yong's winner at Stoke City on December 19 and face a Spurs side full of confidence after booking their place in the FA Cup fourth round courtesy of a replay success at Leicester City.

Dwight Gayle (hamstring) will miss the weekend's game at Selhurst Park and Yannick Bolasie's absence is set to continue after suffering a knock prior to the 4-0 loss at City.

Bakary Sako may return to aid Pardew's attacking worries, and the Palace boss told reporters on Thursday: "The defeats at Villa and City have put us under a bit of a cloud, we need to get back to doing what we're good at doing.

"If we can get a result against Spurs then it will be a good set-up ahead of the next run of games.

"We've worked hard this week trying to get our strikers to relax and set themselves to shoot, rather than to pass or take a touch.

"We actually got into City's box more times than they did ours but we were lacking that final moment. We can improve from within, but having said that, we are trying to improve the [striker] situation [with transfers]."

Tottenham are unbeaten in their last nine Premier League away games and progressed in the FA Cup in midweek to maintain hopes of a domestic and European treble.

Mauricio Pochettino has been keen to keep focus amid talk of a title challenge, but, with FA Cup and Europa League glory to play for and a top-four finish firmly achievable, Spurs travel to south London in good shape to extend Palace's poor form.

"We are Tottenham and we need to prioritise every competition," said Pochettino, who will be without Ryan Mason, Alex Pritchard (both ankle) and Clinton N'Jie (knee).

"The FA Cup is important, the Europa League too and the Premier League is very important for the club. It's for that that we have 24, 25 players to try to compete, to increase our level in the squad and to try to fight for every competition.

"It's a very good challenge for us to try to win the three points against Crystal Palace. We will be in a very good position if we can win the game and the players and the squad are very focused on trying to prepare and being ready to compete."