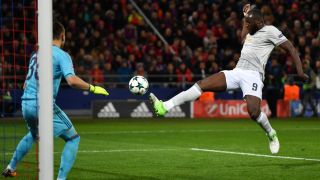 Romelu Lukaku continued his scintillating start to life at Manchester United with a double in their comfortable 4-1 UEFA Champions League win at overmatched CSKA Moscow.

The Russian side had little answer to Lukaku, Anthony Martial and Henrikh Mkhitaryan, with United having now netted seven times and conceded just once in their opening two Group A fixtures.

United's opener in a dominant display at the VEB Arena came in just four minutes as Lukaku powered home a bullet header for his ninth goal in as many games for the club.

Martial sent in the cross for that effort and was quickly in on the act himself from the penalty spot, before also assisting Lukaku's second of the night.

There was no let-up after the interval from the visitors, with Mkhitaryan finding the target following more excellent work from Martial.

United finally eased off the accelerator thereafter, and a late consolation from substitute Konstantin Kuchaev was the only blot on an otherwise excellent night's work.

United were donning grey shirts for the first time since April 1996, when Sir Alex Ferguson famously ordered they change at half-time when 3-0 down at Southampton.

But neither the superstitions surrounding their attire nor an unfamiliar 3-5-2 formation could quell their attacking adventure, with Lukaku opening the scoring almost immediately.

Strike partner Martial curled in a lovely cross and the striker rose highest in the box to power home a brilliant header.

CSKA almost hit back immediately as young starlet Aleksandr Golovin's mishit shot ran into the path of Alan Dzagoev, who cut onto his right foot and forced a sublime save from David De Gea.

United quickly resumed their onslaught thereafter, with Mkhitaryan being denied by Igor Akinfeev following a one-two with Daley Blind.

He could do little moments later, though, as Martial sent the shot-stopper the wrong way from the spot after Georgi Schennikov was penalised for a clumsy challenge on Mkhitaryan.

CSKA's problems went from bad to worse in the 26th minute when Sergei Ignashevich failed to intercept Martial's centre, leaving Lukaku with the simple task of poking home.

For all their defensive frailties, the Russian side looked a threat at the other end, epitomised by De Gea again being forced into action to turn Vitinho's effort over.

Any thoughts United might ease off after the break were quickly extinguished as Lukaku came agonisingly close to a hat-trick, Akinfeev punching away his powerful effort.

The goalkeeper was at it again soon after when denying Martial, although his parry merely fell to Mkhitaryan – who slotted home a fourth.

That was one of the Armenian's final touches, but replacement Jesse Lingard quickly settled in as he was denied by an onrushing Akinfeev following more good work from Martial.

Martial's man-of-the-match display ended when he limped off injured, with United attempting to see the game out thereafter.

However, they failed to preserve their clean sheet as Kuchaev grabbed a fine consolation in stoppage time with a low drilled effort through De Gea's legs from a tight angle.