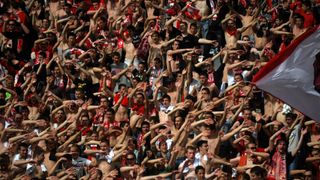 CSKA Sofia, Lokomotiv Sofia and two other Bulgarian teams have been denied licences to compete in European and domestic competitions next season, the country's governing body announced on Wednesday.

Many of Bulgaria's top-flight clubs find themselves in a dire financial state and, as a result, some have had their initial applications to compete next season rejected.

CSKA are the most successful club in Bulgarian history, winning the league title a record 31 times, while city rivals Lokomotiv, who have have four to their name, are in a similarly uncomfortable position financially.

The other two teams to be denied a licence are already-relegated pair Marek Dupnitsa and Haskovo, while the news leaves CSKA and Lokomotiv in an uncertain position as they continue to chase UEFA Europa League places.

A statement from the Bulgarian Football Union read: "After conducting a regular meeting on Tuesday May 19th, the Licensing Commission examined in detail all additional documents of the clubs and refused the issue of a licence for participation in European club tournaments and the Bulgarian Championship for the teams of CSKA, Lokomotiv (SF), 'Marek' and 'Haskovo'."

The clubs have one week to appeal the BFU's decision.