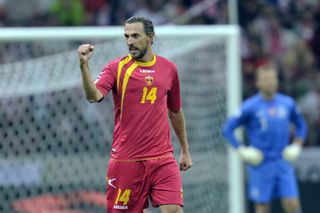 Dejan Damjanovic looks to have finally settled into life at Guoan after moving from Jiangsu Sainty, scoring twice on Sunday to fire his new side to victory against Shanghai SIPG and take his CSL season tally to eight.

However, Guoan's recent form away from home in the league has been patchy with only one win in their last four.

Three wins from three has helped Guoan keep R and F at arm's length, with Sven-Goran Eriksson's side struggling for consistency since the mid-season break only managing back-to-back wins once.

R and F, currently seven points adrift of Guoan are also just three ahead of SIPG in fourth after the weekend's action - with the Shanghai side looking to hit back when they host struggling Henan Jianye.

Guoan subjected SIPG to their first defeat since May last weekend so getting back to winning ways will be imperative for boss Zhikang Xi.

A home win could have further implications for Henan Jianye, who are at risk of dropping into the bottom two as 17th-placed Liaoning Whowin - just a point adrift of safety but winless since May - face rock-bottom Harbin Yiteng

Harbin have collected seven points out of a possible 12 in recent weeks to improve their survival hopes and are looking for a third home win since the mid-season break.

Like Henan, Shanghai Shenxin and Dalian Aerbin could be in danger of being dragged back into trouble if results go against them.

Marcello Lippi's Evergrande have scored 50 goals so far this season and bounced back from their defeat to Changchun Yatai with a 3-0 win over Jiangsu Sainty at the weekend.

Meanwhile, Guizhou Renhe will look to record four successive wins for the first time in the league since May 2013 when they entertain Hangzhou, and there will be mid-table battles as Tianjin Teda meet Sainty and Changchun travel to Shanghai Shenhua.