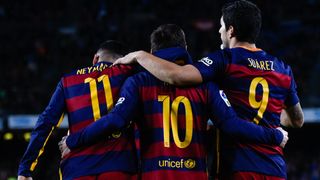 Juan Cuadrado says he would choose the Juventus strikeforce over the feted Barcelona attack of Lionel Messi, Neymar and Luis Suarez.

The MSN trio are regarded as the most threatening in football, but ahead of Tuesday's Champions League quarter-final between the two sides, Cuadrado insisted he would not trade Paulo Dybala, Gonzalo Higuain and Mario Mandzukic for the Barca stars.

Cuadrado regards the different strengths of the Juve frontline as being crucial to the style of the Serie A champions, who are at home in the opening leg.

"I would choose my team-mates," Cuadrado said to the club's website.

"Everyone brings something different to this team and that is our strength. We play as a family and we fight until the very end for each other."

Juventus warmed up for the tie with a 2-0 home league win over Chievo on Saturday and Cuadrado feels the clash with Barcelona must be treated as if it were the Champions League final, rather than a last-eight tie.

"All we can do is think about our preparations and performance and make sure that, come kick-off, we are at 105 per cent," Cuadrado said.

"It will be a fantastic occasion to be part of; playing at home first in front of our own supporters will be a huge boost and we need to go out and try and win the game.

"To do that, we have to be flawless both in attack and defence, like playing in a final. They have some world-class forwards so we must be well-organised, make as few mistakes as possible and capitalise on whatever chances that come our way.

"Do we believe we can do it? Of course we do, always. I know what our team is capable of and I know that we have enough to take on Barcelona."