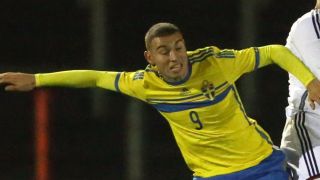 Jordan Larsson has been denied the chance to represent Sweden at the Olympic Games by his father Henrik.

The Helsingborgs' forward has eight goals in 17 appearances during 2016 – form that earned a place in Hakan Ericson's squad for the Rio 2016 football tournament.

But Larsson Sr, the former Celtic and Barcelona star who is now head coach at Helsingborgs, has elected to quash his son's Olympic dream due to an injury crisis in attack for the Allsvenskan club and the Swedish Football Federation (SvFF) have agreed to their request.

"The reason is that we have only two strikers available in the current situation, one of which is on two bookings," Henrik Larsson said.

"We do not know when Linus Hallenius is coming back either. The most important thing is Helsingborgs.

"I understand Jordan's situation and what he misses. Unfortunately, it's part of football. It is sad for him because obviously it would have been a good experience.

"Unfortunately it does not work with the situation we have right now. I have had good dialogue with Hakan Ericson."

He added: "I have always talked to Jordan in the early stages. He knows that we as a club and I as a father were happy when he was selected.

"We said early on that, as it stands, you go but if anything happens, you stay. It is clear that there is a disappointment to it all. At the same time, he is wise and understands."

"It is clear that it is disappointing," Jordan Larsson said. "It is a dream that I had wanted to fulfil.

"At the same time, I am HIF and, as it looks now, it would not have been good if I had gone. I have full understanding for the decision."