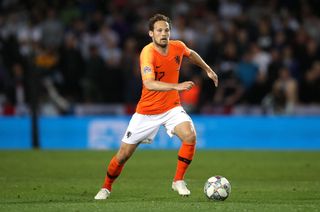 Ajax and Holland defender Daley Blind has vowed “to come back as soon as possible” after being diagnosed with inflammation of his heart muscle.

Blind experienced dizziness during his side’s 1-0 home defeat to Valencia in the Champions League on December 10.

Although he managed to get through the 90 minutes, a decision was taken to rule him out of the final two Eredivisie matches prior to the winter break.

The club has now confirmed Blind’s condition, and that an ICD (implantable cardioverter defibrillator) has been inserted.

According to the British Heart Foundation, an ICD is a small device that sends electrical impulses to regulate abnormal heart rhythms, specifically those that can be dangerous and cause a cardiac arrest.

An Ajax statement read: “Daley Blind has been diagnosed with heart muscle inflammation.

“The central defender has undergone extensive medical examination in recent days, following the dizziness that briefly bothered him during the Ajax-Valencia match.

“It was then decided to place a subcutaneous ICD with Blind, a device that is applied under the skin.

“As a result of this intervention, which took place yesterday, the 29-year-old international will not start the training camp selection at the beginning of January, but will continue to work on his recovery in Amsterdam.”

Via a video message on his Twitter feed, Blind has thanked all those who have so far sent him messages of support, and he is confident of a swift return.

“First of all I want to thank you for all the messages you have sent me,” said Blind, who spent four years at Manchester United before returning to Ajax in a £14.1million move on July 2018. “I really appreciate it. They help me, so thank you for that.

“Second, Ajax just posted an update online about my condition. The most important thing is I’m feeling good at the moment. I’m trying to come back as soon as possible.

“Again, thank you for everything, and I’ll see you guys soon.”