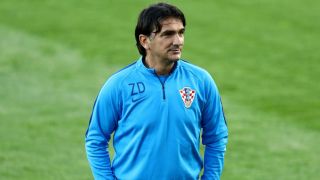 Zlatko Dalic was coy when asked if he wanted to move to the Premier League as the Croatia head coach maintained his focus on the looming World Cup final.

Dalic has fast become a household name after guiding Croatia to their first World Cup decider, with France standing in the way of the Balkan nation and a remarkable title in Moscow Sunday.

The 51-year-old replaced Ante Cacic as Croatia struggled during qualifying, though Dalic oversaw a successful play-off against Greece to reach Russia 2018.

Dalic – who worked his way up the ranks in Asia where he led UAE giants Al Ain to the 2016 AFC Champions League final – now stands on the cusp of Croatia's biggest achievement.

Quizzed on his future plans and a possible switch to England, Dalic told reporters: "I can't really think about that now because it may give the wrong message to some Croatian people when we are about to try to become the best team in the world.

"But maybe. Now we have to try to do something big."

"In the big European leagues you look for brand names and it's all wrong," Dalic added. "People get big jobs just because they were big players. But what does that mean?

"I started at a small club. I told them straight away that a big name equals a big mistake that will cost big money.

"Nothing was given to me on a plate unlike some managers in Europe who can manage because of their name.

"But I always said: 'Give me a Barcelona or a Madrid and I will win titles'."

Dalic continued: "Throughout my career and my life I've always taken the hardest path and had to fight. I didn't want to stay in Croatia, be a middling coach and live off handouts. So I went abroad.

"We are not respected in Europe, even though Croatian coaches like Slaven Bilic and Niko Kovac [Bayern Munich head coach] have great results. I started at the bottom of the ladders and in a year I was the best coach in Asia.

"I managed the best club in Asia. I reached the final of the Champions League in Asia. You cannot sneeze at that. That brought me huge experience. I was there seven years and it was a hard path but I believed in myself.

"When Croatia called I never had any doubts or dilemmas. I knew what we could do on the basis of my faith in myself and players. People like me, Kovac and Bilic. This is the proof that we know what we are about. But we've been underrated as coaches. Now we have all shown we can achieve things and we are proud."