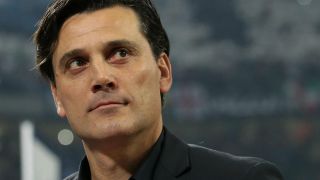 The former Fiorentina and Sampdoria boss has found his position under increasing scrutiny this week and defeat to their city rivals leaves an expensively assembled Milan squad with four wins and as many losses from eight Serie A matches.

Mauro Icardi was Inter's hat-trick hero, although his first two goals were pegged back by Suso and a Samir Handanovic own goal respectively as Milan rallied superbly after half-time.

But Ricardo Rodriguez was adjudged to have impeded Danilo D'Ambrosio at a late corner and Icardi stroked home a 90th-minute spot-kick.

"Ricardo did not pull him down," Montella told reporters afterwards. "He was very skilled, D'Ambrosio, and it makes me angry to lose in this way.

"I hope we get a penalty like this in the next games."

Nevertheless, Montella took heart from his team's display during the second half, when the introduction of teenage forward Patrick Cutrone unsettled a previously untroubled Inter defence.

"I'm proud of what the team has pulled out," he said. "We reacted with pride and showed the soul of Milan,

"The result has not been rewarded but I am very optimistic. Even tonight the glass is half full.

"I see a team that goes ahead with a precise way of playing. We created seven or eight chances against a great Inter, so I'm satisfied and want to carry on with this project."

Milan are already 12 points behind leaders Napoli, 10 points shy of their city rivals and seven outside the Champions League places, but Montella added: "Looking at the standings, it all seems unattainable but the boys have shown quality and the championship is long.

"I am absolutely convinced that everything is possible."