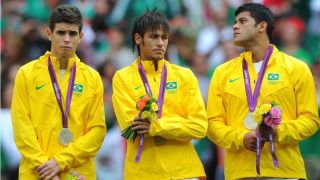 Leandro Damiao - Brazil's star of London 2012 - has backed the country to triumph on home soil at the Rio Olympic Games.

Olympic gold remains the one major honour to elude the five-time World Cup winners, who finished second in 2012 with Damiao scoring on six occasions.

Barcelona star Neymar - also part of the 2012 squad - will lead his country in the men's football tournament next month and Damiao is confident the hosts will prevail this time around.

"I had that opportunity [to win gold] but, unfortunately, we did not win," he told Brasil Global Tour. "But now we have another chance, at home.

"Brazil are under immense pressure to win, but I think we have great players. Brazil will always field great teams but unfortunately last time we lost the final to Mexico and had to settle for silver.

"I'm sure that we will win because we have great players. I will be cheering for them."

Discussing Brazil's Neymar-led forward line, Damiao added: "They are great strikers and I think they are just as prepared as I was when I managed to score enough goals.

"They have to enjoy it because it goes very quickly – in one month it will be all over."