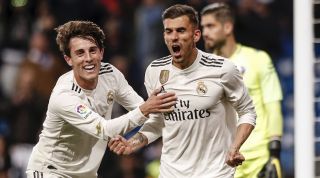 Arsenal are closing in on the loan signing of Dani Ceballos from Real Madrid, report AS.

The Gunners are set to land the Spanish midfielder, who was also being tracked by Tottenham and Milan, on a season-long loan deal.

Ceballos chose Arsenal ahead of Spurs and the Rossoneri because he is keen to work with Unai Emery.

Madrid were not interested in selling Ceballos permanently unless they could insert a buy-back option into the deal, so Arsenal have only been able to borrow the former Real Betis man.

Ceballos played a starring role in Spain's triumph at the European Under-21 Championship last month.

His imminent arrival is a major boost for Arsenal, who have endured an otherwise frustrating summer in the transfer market.