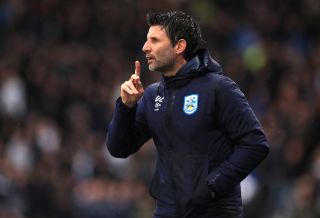 Danny Cowley called on Huddersfield to grab their survival chance after a deserved 3-0 win at Birmingham.

Fraizer Campbell and Elias Kachunga added to Karlan Grant’s early penalty as the Terriers hauled themselves out of the Sky Bet Championship drop zone.

Huddersfield are now three points above the bottom three after a first win since returning from lockdown.

Town manager Cowley said: “To be a good team you have to do it consistently, that is the challenge now. We will work really hard to do that. We’re not going to over celebrate.

“We’re pleased to perform well, we’ve taken a lot of criticism and most of it has been fair, but when you’re in a difficult moment you learn a lot about yourself. It’s easy to stand tall when things are going well.

“You are defined by the difficult moments and how you respond. We have to take the confidence from it and the focus now goes to the game on Saturday against Preston.

“We’re Huddersfield Town, we’re a working-class club and working-class town and we have to compete. We did that and did the fundamentals well.”

Grant opened the scoring from the spot after 10 minutes when he was felled by Harlee Dean.

Lukas Jutkiewicz missed Birmingham’s best chance when he headed over at 1-0 but the hosts never looked a serious threat.

Grant missed the chance to score his 20th goal of the season when Lee Camp saved his 50th-minute penalty after Gary Gardner hauled down Chris Schindler.

But 52 seconds later Campbell made it 2-0, turning in Harry Toffolo’s low cross for his first goal since November.

Kachunga added a third, heading in from close range, to leave Birmingham 17th and seven points above the drop zone with six games left.

Boss Pep Clotet said: “We didn’t like the game or the result.

“We have to put our hands up and take it as a bad game as that’s what it was and Huddersfield were better than us in most things.

“We have to bounce back and get points on the board. We’re not happy, we’ve spoken to the players and they are committed 100 per cent to bouncing back.

“We need to make sure our focus is there from the start. As a team we always need a strong start.

“I have a good relationship with all the players, I respect them and trust them 100 per cent. All the players are fully focused on doing their best. It’s not like they are not trying.”