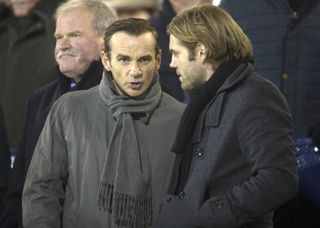 Danny Lennon revealed Clyde’s players have had unlimited access to footage of the club’s famous William Hill Scottish Cup win over Celtic ahead of Sunday’s rematch.

January 8, 2006 is a date etched into the mind of every Bully Wee fan after their shock 2-1 win over the Hoops at Broadwood.

The match served as Roy Keane’s Celtic debut and he played alongside current Parkhead boss Neil Lennon as the current treble-treble winners were humbled.

Ahead of their fifth-round clash at Broadwood, the League One outfit’s boss Lennon has used the giant-killing game as incentive and motivation.

He told Radio Clyde: “We use videos and we put the game on it straight away after the draw came out and it was accessible for the players at any given time.

“What a performance it was by Clyde that day.

“They harried, chased, played very well and were worthy winners that day. That is what you have to do.

“When the draw came out inevitably a lot of people spoke about the last time the two teams met and Clyde humbled Celtic that day.

“So, can lightning strike twice? I would love to hope so.

“What we have certainly done is earn the right to go toe-to-toe with Celtic and you want to test yourself against the best.

“Celtic have scooped everything over the last few years and undoubtedly they are the best team out there and that’s what we want to challenge.”

Lennon has done as much preparation as possible to face a Celtic side who have won the last 10 trophies in Scotland.

The former St Mirren boss said: “When you have a Scottish Cup tie against Celtic, you know you have to be prepared.

“They have so many qualities throughout, whether that be their starting line-up or coming off the bench or even up in the stand.

“You have to know what their strengths are and try to turn them into weaknesses and keep them at bay and hopefully on the day that your 11 players out there turn up and have the game of their lives while maybe a few Celtic players aren’t quite at it.

“That’s the wee bit of luck that you need. We will give it everything that we can.

“It is something that we are very much looking forward to.”