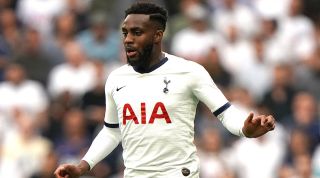 Danny Rose believes Jose Mourinho did not give him enough opportunities at Tottenham before his loan move to Newcastle last month.

The England international has moved to St James' Park until the end of the season after finding game time hard to come by in north London.

Rose made only five appearances under Mourinho, who often fielded centre-half Jan Vertonghen at left-back.

And while the 29-year-old says he did not initially want to leave Tottenham, a lack of action over the festive period changed his mind.

"I do feel I wasn't given as much of a chance as everybody else in the backline," the defender told BBC Radio 5 Live. "I did want to play for him.

"I knew after a month [of Mourinho joining] I was never going to play. It was difficult going out to train knowing I wasn't going to play.

"It's not worked out, but full respect to him and what he's doing at the club. He took over with the club 12 points adrift of Chelsea [now in fourth place] and now it's four.

"I have to be honest, I thought I would continue playing."

Rose also admitted that a knee injury he suffered in 2017 was a major setback in his career.

"I'd love to be the player I was three years ago when I was doing well," he added. "I thought I would return to become that player after the injury, but I had a rude awakening.

"I've been given a chance to play week in and week out [at Newcastle]. "I want to play football again - with the Euros in the summer, I want to put myself in window.

"If I go to Newcastle and do well they may think that's what's expected of me. But if I don't do well then they might think Tottenham were right to let me go. I have a lot riding on this, but I'm confident in my ability and I know I will do well."