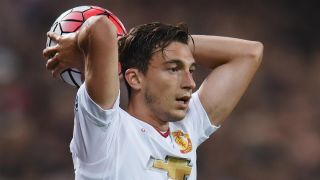 Matteo Darmian is keen to follow in the footsteps of former Manchester United greats Patrice Evra and Gary Neville and become a key figure at Old Trafford.

The Italy international joined United from Torino ahead of the 2015-16 campaign and has since become an important first-team member under manager Louis van Gaal.

However, the 26-year-old realises he still has plenty of work to do if he is to equal the success of Evra and Neville at United.

"They are two full-backs who have created football history, not only at Manchester United but in the world," Darmian told the official United website. "I've seen them both play, they have both been two very important pillars for United. They've contributed to the success of the club.

"Patrice played in Italy last season so I had the possibility of more contact with him. I played against him twice in the derbies [against Juventus], and in Italy he is proving to be a champion just like he was at United.

"Obviously, Neville was captain at United and a legend at the club, the victories he had, the trophies he won. His story speaks volumes.

"Making comparisons with other great players is always difficult. They are both champions. Instead of comparing them, it's nicer to refer to them as idols to follow.  They were so great it's almost impossible to reach what they achieved, but they can be an incentive to always give more and always work to your best to try to at least get a bit closer to what they did.

"They've had a lot of success and become legends of a very important club, that's probably their greatest achievement, all the trophies that they won here and having become points of reference of this club."

Darmian has made 25 appearances in all competitions for United this season.