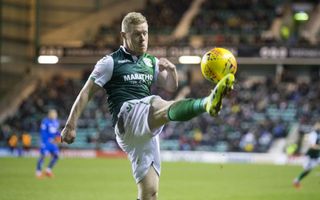 Daryl Horgan aims to build on an enjoyable end to what he described as a mixed first season with Hibernian.

The winger was in and out of the starting line-up and playing in different positions under Neil Lennon after joining from Preston on a three-year deal in August.

But the Irishman has started every game on the right wing since Paul Heckingbottom took charge, helping Hibs go on a 10-game unbeaten run in the Ladbrokes Premiership before defeat by Rangers last weekend ended their hopes of a top-four finish.

Horgan said: “I’ve enjoyed it. Ups and downs though. The last couple of months I have really enjoyed it. I have been playing a lot and obviously making impacts in games. That’s what you expect to do as a wide player.

“Obviously the run we have been on, going from eighth to nearly fourth, has been unbelievable.

“We have to build on that next season and my own performances definitely have to improve, but we will work on that.

“Playing wide, where I naturally feel is my best position, and playing consistently, definitely did help.

“Your instincts sharpen up, you get more used to picking up positions and making runs you need to make, and linking with Dave (Gray) and knowing what movements he is going to make.”