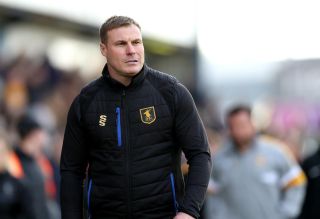 Flitcroft took charge at Field Mill in March 2018 but has lost his job having been unable to seal promotion to the third tier.

The club announced the decision on Tuesday, while also confirming academy manager John Dempster has been appointed as his immediate replacement.

Flitcroft’s coaching staff also depart, with chairman John Radford insisting the move was made “with the best interests of Mansfield Town Football Club in mind.”