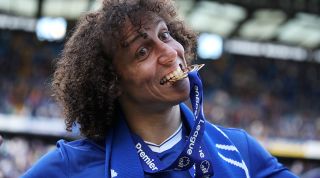 Luiz and Fabregas are preparing for this weekend’s FA Cup final at Wembley, as Chelsea take on the latter’s former club Arsenal with a domestic Double up for grabs.

But Luiz has admitted that his team-mate’s early rise – Fabregas became Arsenal’s youngest ever player aged 16 and 177 days in 2003 – made him an appealing wonderkid to play as on the popular football game when he was making his own way up the footballing ladder in Brazil.

Luiz told the official 2017 FA Cup Final matchday programme in a special team-mates segment: “What can you say about Cesc? He’s just top class. He knows more about playing in the Premier League than anybody, perhaps.

“He’s the same age as me, but when I was just a teenager I played PlayStation with him on my screen – because he did so well so quickly as a young footballer. Now we’re in the same team and that’s amazing.

“But Cesc starting so young has given him great experience. He’s brilliant to have around because he helps everybody.”

Luiz discussed each of his Chelsea colleagues, reserving particular affection for compatriot Willian.

“He is a friend from my childhood, I played with him for the first time when I was eight back in Brazil so he is like a brother,” said the big-haired stopper.

“He’s top class, a top player. He has had a very difficult moment this season because he lost his mum. It was very hard for him but he showed his maturity in the way he reacted.

“He has played very well and he’s really maturing on the pitch – he is a very intelligent player, a pleasure to play with. He’s not playing as much as he did in the past, but when we need him he’s there and that’s a professional attitude.

“He lives next door to me and we are together almost every day. We have a lot of barbecue.”

Don’t miss out: get your hands on the official 2017 FA Cup Final matchday programme right here