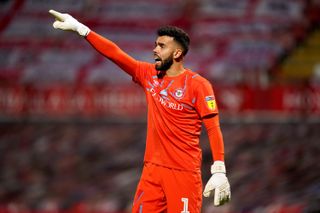 When David Raya swapped Barcelona for Blackburn, the Premier League quickly slipped away.

Rovers were relegated from the top flight just months after Raya moved to Ewood Park in January 2012.

It drifted even further out of reach when Blackburn slumped into League One five years later.

But now the Brentford goalkeeper is 90 minutes away from the top flight ahead of Tuesday’s Sky Bet Championship play-off final against Fulham.

His first Wembley appearance will mark a milestone in his journey after leaving parents Antonio and Trini at 16 to pursue a dream.

It has come via a leap of faith but it is one which is now within touching distance.

“When I came to England, my aim was to be in the Premier League,” Raya says, with a Lancashire twang occasionally merging with his Catalan accent.

Happy to sign for @BrentfordFC and start a new challenge in my career, looking forward to start and meet you all #bees 🐝 pic.twitter.com/DnJJFT0ix4— David Raya Martin (@daviidraya1) July 6, 2019

“You never know if it’ll happen but being one game away from that dream having been a 16-year-old kid coming to a new country and not knowing the culture or the language, everything has paid off.

“I came on trial for four days in Easter 2011 when I was 15 but I couldn’t move to England even if Blackburn wanted to sign me. I came again in the October for two weeks and then a week later they called to say they wanted me so I joined in the January.

“Blackburn was different. Moving on my own was difficult but it was harder for my mum and my dad to let their son of 16 go to another country on his own.

“There were good days and bad days but there was never a question of me going back to Spain.

“At the time, Blackburn got relegated to the Championship but I was singled minded to know what I wanted and I wasn’t going to give up until I got it.

“When I get it, I’ll know I want more and hopefully from Tuesday I can be a Premier League player.”

After starting in UE Cornella youth system, Raya’s rise has been swift since becoming Blackburn’s number one in 2017, helping them back to the Championship two years ago.

Indeed, it has only been just over five years since he was on loan at National League Southport, a move he credits with shaping his career.

“I have Southport in my heart, I thank them for everything they did for me. It made me the player I am,” the 24-year-old told the PA news agency.

“I was there for three or four months and it was an unbelievable experience. It made me realise how important it was to play in those leagues because they are fighting for their lives, the salaries and families.

“Southport made me mature quickly because the guys were playing for the next mortgage instalment.

“That’s when you realise it’s not just football, it’s your job and if you don’t do your job it costs you. I was 19 at the time and I’m lucky to have had that experience.

West London is 🔴 Massive win after this long break. Happy to be out there again. Great cleansheet from the team. We go again Friday 🐝 @brentfordfc#bees#WhenWePlayStayAwaypic.twitter.com/21zB9Pxdrx— David Raya Martin (@daviidraya1) June 20, 2020

“When something good happens in your job – whether you’re a footballer or work in an office – you appreciate all the hard work you’ve put in.”

Last summer’s £3million move to Brentford has paid off and Thomas Frank’s impressive side finished third this season, two points adrift of automatic promotion after losing their final two games to Stoke and Barnsley.

One victory would have sent them to the Premier League ahead of West Brom but they were forced to settle for a play-off against Swansea.

The Bees won 3-2 on aggregate, with Raya saving an Andre Ayew penalty in the first leg, to gave an empty Griffin Park a send off before the club moves into a new 17,250 capacity stadium less than a mile away.

“The club is set up for the Premier League,” added Raya, who kept 16 clean sheets this season to share the Championship’s Golden Glove with Millwall’s Bartosz Bialkowski.

“Sometimes it doesn’t happen, we don’t know what will happen on Tuesday but we will give everything.

“When I came here I was shocked by the place, how well the club is run, the atmosphere, staff, players. We know what we want to achieve.”

And, ahead of the Wembley trip, is he superstitious?

“No, but I always wear the same boxer shorts. I do wash them,” he says. “They are always clean.

“It’s something I’ve done for years. It’s a habit and that keeps you focused. I also always get dressed from the right, even the tape on my hands goes on my right hand first.

“I use those habits to concentrate on what I’m doing. They’re not lucky boxers – they’re just comfortable.”