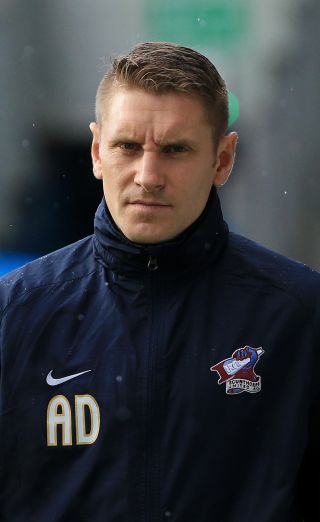 Caretaker manager Andy Dawson and club captain Rory McArdle regret the manner in which they dealt with Scunthorpe’s controversial equaliser at Plymouth on Saturday.

Josh Morris brought the Iron level at 2-2 when he intercepted the ball as injured Argyle goalkeeper Matt Macey tried rolling it out to the touchline and subsequently chipped the ball over the stricken keeper.

Plymouth went on to win the game 3-2, with both teams suffering relegation to Sky Bet League Two.

Immediately after the game, Scunthorpe chairman Peter Swann, who conducted the post-match press interviews instead of Dawson, said of the goal: “We didn’t respond as well as we should have done as a football club in a sporting manner.

“I need to speak to the manager, the captain and the rest of the coaches to find out what was in their minds.

“We have been a very honest and hard-working club for the last five or six seasons while I have been here and I would like to think we play fair football. That was really disappointing.”

Dawson and McArdle have now spoken out on the situation, with the Iron’s interim boss saying: “In the heat of the moment it was a difficult situation, with it being such an important game when there was so much at stake, not knowing the full circumstances with the goalkeeper and not seeing exactly what went on.

“In hindsight and having watched it back, we regret the decision made and would have done things differently.

“We’re just thankful that it didn’t affect the outcome of the game or influence the league table at the final whistle.

“I went and apologised to their manager after the game and he accepted the apology. We wish Plymouth Argyle well going forward.”

McArdle was also remorseful, and said: “Emotions were riding high during the game, and looking back on the situation, we can see why Plymouth and their fans were aggrieved.

“In retrospect, we feel we could have dealt with it in a different manner.”