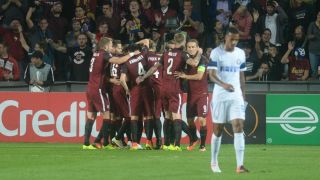 Frank de Boer blasted his Inter players for a lack of focus as they fell to a humiliating 3-1 Europa League defeat at Sparta Prague.

The three-time European champions had suffered a disappointing start to their continental campaign - losing at home to Hapoel Be'er Sheva - and could not respond in a dreary display at Generali Arena as Inter slumped to bottom of Group K.

De Boer's men, who had Andrea Ranocchia sent off 15 minutes from time, were 2-0 down by half-time and the Dutchman was particularly irked at seeing his team switch off for the second goal.

"We can talk about tactics, but the first thing is the attitude," he told Sky Italia.

"On the second goal, we have not read the action and for me that is not possible. We gave the goal to the opponent because we have not focused.

"The second half was better, but the red card changed the game. At 3-1, it was not possible to regroup.

"We gave away a lot of balls to the opponent and this is where we need to improve a lot. We lost the ball too easily."

"We have to play in Europe as we did in the Derby d'Italia [a 2-1 win against Juventus earlier this month]," he said. "When we thought we'd play football, we were already 2-0 down. It's so wrong."

Goalscorer Rodrigo Palacio, meanwhile, did not wish to reflect on the defeat, instead insisting Inter would now have to show their quality and win their remaining group games to progress.

"Once again we played poorly, so let's move on," he added. "Now we just have to win them all."