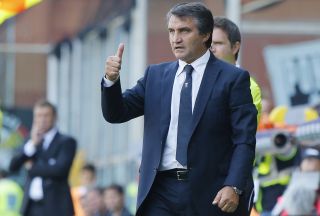 The Sicily club were beaten 2-1 at Cagliari on Saturday and sit just one place and a point above the relegation zone in Serie A.

And the club have responded to that defeat by replacing Maran with the experienced De Canio, who had been out of work since being sacked by Genoa a year ago.

"Calcio Catania announce they have removed Rolando Maran from his position," an official club statement read.

"We give him our most heartfelt thanks for the work done and wish him the best for his on-going career.

"The first team has been handed to Luigi De Canio."

Maran took over as Catania coach in June 2012 following Vincenzo Montello's departure to Fiorentina and masterminded an eighth-placed finish in his first season in charge.