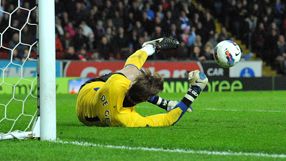 In the corresponding fixture in December, when lowly Blackburn won 3-2 at Old Trafford, De Gea was all over the place and gave United fans nightmare recollections of misfits down the years such as Massimo Taibi and Roy Carroll.

Apart from the great Peter Schmeichel and Edwin van der Sar, who retired last year, Ferguson has a poor record in picking keepers with Fabien Barthez and Mark Bosnich among those who also largely flopped.

De Gea, the 18 million-pound signing from Atletico Madrid, whose gangly frame contrasts with the girth of Schmeichel, has won his manager over.

"David has done his bit for the team. He has really grown in stature the boy. He was outstanding."

Part of the reason for De Gea's improvement possibly lies with the fact that Anders Lindegaard, his rival for the goalkeeping jersey all season, has been out with injury in recent weeks therefore guaranteeing him a start.

Ferguson was previously rotating his keepers but it did little to boost De Gea's confidence when he was trying to get used to the extra pace of the Premier League.

De Gea has also had a settled pair of centre-backs in front of him of late, with Jonny Evans and Rio Ferdinand finding form at the right time for United.

Liverpool's Pepe Reina is in shaky form and could even open the door for De Gea to grab the third goalkeeping spot in Spain's Euro 2012 squad.