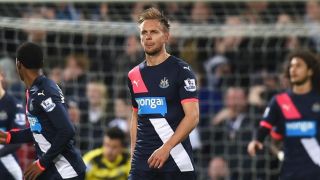 Newcastle United forward Siem de Jong had genuine fears for his sight after a horror injury in training, according to manager Steve McClaren.

McClaren revealed the Dutchman was left in agony after being poked in the eye in training and was rushed to hospital with blood gushing from his eye on Wednesday.

The former England boss said there was serious concern for De Jong's sight for "two to three hours".

"It was just in training and he accidentally got poked in the eye," McClaren said.

"I wasn't here, but he went down screaming. So they said 'Let us have a look at your eye' and there was blood pouring from it.

"He wears contact lenses, and one of the contacts had come out and gone in his eye.

"[There was] a massive danger, a big danger [of losing sight[. He was rushed to hospital."

McClaren was attending a memorial for former Newcastle goalkeeper Pavel Srnicek, who passed away in December, and was shocked to return to the injury.

"I was at Pav's memorial so I came back and saw him in a darkened room. It was the biggest black eye ever and headaches and everything," he added.

"I've seen him this morning and it looks a lot better. Fortunately the doctor says probably a week or two to settle down. So very lucky.

"The exact words I said to him when I saw him was: 'You've had no luck, have you?"

"I would say frustration is probably not the word. I think certainly from what I’ve heard and seen looking at him it will just be a week or two."

The injury was De Jong's second big scare in two years after he suffered a collapsed lung last season.