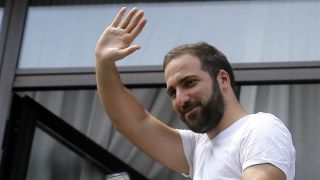 Higuain's switch to Turin was confirmed on Tuesday, with Juve shelling out €90million for the striker's signature and tying him down to a five-year deal.

The transfer ended the Argentinian's three-year stay at Napoli, scoring 36 top-flight goals as they finished second to the Bianconeri in Serie A last season.

"People say that to speak of betrayal is exaggerated, but I think the opposite," he told Corierre dello Sport.

"There is the full sense of betrayal in this choice because it includes ingratitude.

"True, there was the clause so there was nothing formally incorrect ... but the unscrupulous nature of football means there is no respect for sentiment.

"We understood … that we might run the risk of having to look for a new centre-forward, but we didn't think that risk was serious, or that he could simply wipe clean his three years spent with Napoli."