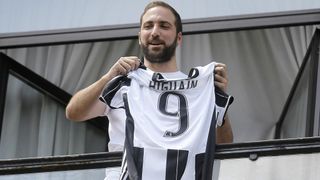 Gonzalo Higuain has accused Napoli president Aurelio De Laurentiis of pushing him into the decision to join Juventus.

The Argentina international sealed a €90million switch to the Serie A champions this week, after agreeing a five-year contract worth a reported €7.5m per season.

De Laurentiis claimed he felt "betrayed" by Higuain's decision, accusing Higuain of showing ingratitude towards Napoli despite three strong seasons with the club.

But the former Real Madrid forward has hit back at De Laurentiis, saying that the duo never saw eye-to-eye.

"My relationship with him was never good because his way of thinking was not like mine," he said at his official presentation in Turin on Thursday. "My choice also came about because he pushed me to make it.

"Now I'm very happy here and I thank Juve for their great effort to get me."

Napoli boss Maurizio Sarri had described feeling "bitter" about Higuain's decision to accept Juve's offer without consulting him, telling Corriere dello Sport:  "I was expecting at least a phone call, even if it was just for five minutes before he had his medicals.

"But I'm old enough not to be surprised. The lads also expected a farewell. As far as I know, there was nothing."

Higuain has now explained his reasons for keeping quiet on his intentions, though he understands the anger from Napoli supporters.

"I was silent, but now I can express myself," said the 28-year-old. "I had three good years in Napoli, and I understand that they are angry with me. I saw the insults, but this is a choice I made for me. I'm happy to have done it.

"It was my choice to keep calm and stay silent. I was just thinking of my holiday with my friends and family.

"He [Sarri] was very important to me, he helped me grow. I only have words of thanks for him."