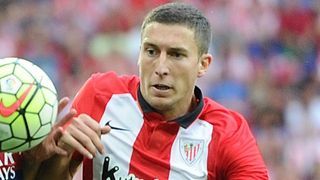 The visitors' task was made incredibly steep after goalkeeper Gorka Iraizoz received a fourth-minute red card for bringing down Luis Suarez.

Lionel Messi converted the resulting penalty and Suarez went on to complete a hat-trick against diminished opponents.

Athletic host Barcelona at the San Mames in the quarter-finals of the Copa del Rey on Wednesday and De Marcos is glad of the quick turnaround.

"That's the beauty of football, in three days' time we will have the chance to get our revenge," he told reporters.

Barcelona president Josep Maria Bartomeu bemoaned the rule stipulating a penalty and a red card for professional fouls after the match, having watched Iraizoz's premature departure undeniably take away from the spectacle.

De Marcos echoed these thoughts as he reflected on the "impossible" task of taking on the Spanish and European champions with reduced numbers.

"[Without the red card] the public can enjoy it more," he said.

"It's hard enough to take a point here with 11 – imagine how difficult it is with 10?

"They have very good players and even if their passing isn't precise, it's impossible to defend against them."

De Marcos added: "It tipped the balance in their favour but it was a bit controversial.

"The referee saw it as a direct red card – obviously he doesn't know what it's like to play for 90 minutes at Camp Nou on 10 men."