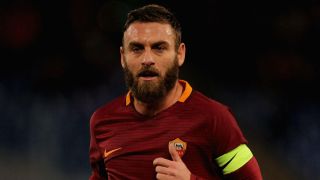 Daniele De Rossi has signed a new contract with Roma that will keep him at the club until June 2019.

Roma waved farewell to club icon Francesco Totti at the weekend, but they have to kept another homegrown star on board.

De Rossi's deal was due to expire next month, but he has now penned a two-year extension to commit his future to the Stadio Olimpico side.

The 33-year-old came through the ranks of the club's youth academy and has made a total of 561 appearances in all competitions for Roma since making his debut in 2001, scoring 59 goals in the process.

De Rossi played a key role in Roma's second-placed finish in the Serie A table this term to help them return to the Champions League, scoring four goals in 31 league outings.

The experienced midfielder is the second key figure to agree fresh terms in recent days, with Netherlands international Kevin Strootman signing a renewal until 2022.