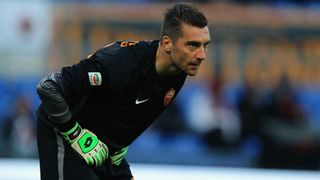 The 39-year-old left Roma at the end of last season following the expiration of his contract at the Stadio Olimpico.

"Monaco are pleased to announce the signing of Morgan De Sanctis, who has agreed to join the club for one season," a club statement confirmed.

"De Sanctis will head to Lausanne to link up with the first-team squad at their training camp on Wednesday."

Vice-president Vadim Vasilyev said: "We are very happy to welcome Morgan De Sanctis, who this season will provide Monaco with the benefit of his experience of the highest level."

"It's an honour to sign for Monaco, a big club in the French league," De Sanctis added. "I'm looking forward to helping the team achieve its targets this season."