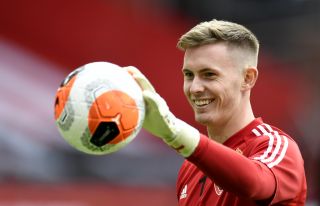 Ole Gunnar Solskjaer must have been looking forward to some peace and quiet. Dean Henderson’s first call-up to the England team for Iceland and Denmark assignments this week meant his young goalkeeper would be out of his hair for a few days, allowing the Norweigian time to ponder a growing conundrum.

That was, of course, before Henderson was summoned to a press conference on England duty, his first as a member of the Three Lions squad.

“I accept that you can't be No.1 for England if you are No.2 at your club,' he boldly told reporters. 'I know what I've got to do. We're all challenging for the No 1 shirt and it's obviously something that I aspire to be. I'm so close now so I'm not going to give up, I'm going to put the pressure on.”

That’s all Ole needed. Managers are keen to talk up the benefits of a selection headache. After all, how can having too many good players to choose from be a bad thing? Yet Solskjaer appreciates this is a particularly tricky situation.

“I respect David,” Henderson went on to say. “He's been a phenomenal servant for the football club and one of the best in recent years. It's down to me. I know what challenges are going to be ahead. I'm well up for it.'

On the one hand, David De Gea’s wobbly form at Manchester United means some genuine competition might be good for everyone. As able as Sergio Romero may have been, the Argentine was content to play second fiddle at Old Trafford.

Henderson, on the other hand, has again made clear his desire to push De Gea for a place in the first team, meaning the Spaniard will need to up his game or lose his place. It’s possible the competition will inspire the 29-year-old to reach the heights which recently saw him win four player of the year gongs in five years at Old Trafford.

Should that happen, though, United will almost certainly need to sell Henderson. The England man won’t play backup and, following a sensational two-year spell at Sheffield United on loan, he won’t be short of suitors, despite just signing a new £120,000-a-week deal with the Red Devils.

At 23, Henderson represents the future There’s no reason to believe the goalkeeper, who came through the ranks at Old Trafford after joining at the age of 12, can’t be United’s first choice goalkeeper for the next 12 to 15 seasons. Losing him now would be a huge blow, especially if De Gea’s form were to remain patchy.

In an ideal world, Solskjaer would persuade Henderson to bide his time - at least until De Gea’s hefty contract is up in 2023. But, with the latest noises indicating an unwillingness to do so, how Solskjaer handles the situation will be fascinating.

Who the manager selects for the opening game of a new Premier League season against Crystal Palace on September 19 is anyone’s guess.